Blair steps down to give Grant his chance

Scottish skipper Mike Blair has stepped down from the leading role at Edinburgh and handed the captaincy reins to back row man Roddy Grant. [more] 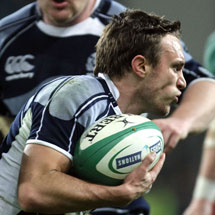 Scottish skipper Mike Blair has stepped down from the leading role at Edinburgh and handed the captaincy reins to back row man Roddy Grant.

The 23-year-old Scotland A cap replaces the 2009 British & Irish Lions scrum half as the top man at the capital outfit having led the side in the last two matches of the 2009/10 campaign.

Born in Botswana to Scottish parents, Grant represented South Africa at water-polo at under 15 and under 16 age groups. He played for Natal Schools in 2004 and 2005 and was drafted into the Natal Sharks' high-performance squad in 2005.

But his Scottish roots took over when he joined Border Reivers in the summer of 2006 as an apprentice. Seven months later he made his debut for the professional team as a substitute in the Magners League match against Newport Gwent Dragons.

Since then he has graduated from the Scotland Under 19 and Under 21 teams into the Scottish A and Sevens sides. The next step is to follow the family tradition of becoming a fully fledged international.

Rugby is very much in his blood as both his maternal grandfather and great uncle were international referees. In fact, his great uncle, George Burrell, also played full back for Scotland in the fifties and was manager of the 1977 British & Irish Lions tour to New Zealand.

"Everything we've seen from Roddy since he came into the Edinburgh fold has shown him to be a mature and confident rugby player who can handle anything that's thrown at him,” said Edinburgh coach Rob Moffat.

Blair has pledged his full support for his back row colleague having ended speculation about a possible switch to Ulster by signing a new contract.

"I'm going to approach my rugby in exactly the same manner as before, giving as much as I possibly can as both an individual and a leader,” said Blair.

“Roddy can expect my full support and he's got an exciting future ahead of him, as do Edinburgh generally. The potential that exists in this team was the main reason I decided to stay and sign my new contract."

Grant will get his first taste of leading Edinburgh in their pre-season friendly against Bath at The Recreation Ground on 20 August. He is excited by the prospect.

"This is a proud day and a massively exciting opportunity for me. It's an honour just to be an Edinburgh player, so to be named captain is one of the best things that's ever happened to me,” said Grant.

“I'm going to work as hard as I possibly can to make a success of the job and to ensure the team has a great season. All the ingredients are there for that to happen."