Former British & Irish Lions hooker Robin McBryde is heading back to the Scarlets to act as their forwards coach for the new season. [more] 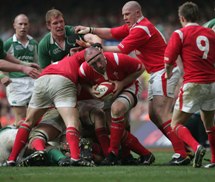 Former British & Irish Lions hooker Robin McBryde is heading back to the Scarlets to act as their forwards coach for the new season.

The former Wales star will add his new position to that of Wales Assistant Coach in a dual role that should benefit both club and country.

The pioneering new arrangement has been agreed between the Welsh Rugby Union and the Scarlets, which will commence this Sunday, 1 August, will see McBryde work with the Scarlets at all times when the Welsh squad are not in camp

The arrangement has the full approval of all four Regions and has been brokered through close liaison with Regional Rugby Wales. McBryde will remain a full time employee of the Welsh Rugby Union, but will be paid by the Scarlets at all times when operating within their system.

“Being involved with Wales and the Scarlets as player and then coach has been both an honour and a privilege which has shaped my rugby development,” said McBryde, who made 250 appearances for the Scarlets.

“I remain totally committed to my international role and, within that function, I have never lost touch with the regions. Having a history at the Scarlets, I am aware of their structures and know some personnel very well.

“International rugby teams need close alignment with the teams which supply their players and I am now perfectly positioned to enhance and develop that through my activity with the Scarlets.”

McBryde won 37 caps for Wales and toured with the 2001 British & Irish Lions in Australia. He joined the Wales management team in the summer of 2006 and was acting Head Coach for Wales’ tour to North America and Canada in 2009.

The move not only has the backing of the WRU, but also the wholehearted approval of Wales Head Coach Warren Gatland.

"Robin plays an important role in the Wales squad and this new venture will undoubtedly benefit both the Welsh team and the Scarlets,” said Gatland.

“Robin’s close links with the Scarlets have made this arrangement possible and I know he has the skill and commitment to make it work well for us all. He will also personally benefit from the opportunity to work with a team on a day to day basis and to experience the development and progression of this side.”