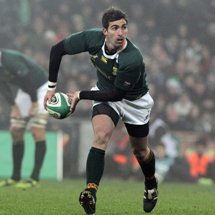 The reigning Magners League champions are due to launch the defence of their title at Ravenhill on the opening weekend of the season, but a shoulder injury sustained in the Currie Cup last weekend is likely to rule out Pienaar from that clash.

The Sharks utility back – he played outside half for the Springboks in the opening two Test victories over the Lions last year and was back at scrum half in the recent Tri Nations defeat to Australia – damaged his AC joint in the victory over the Cheetahs in Bloemfontein.

Pienaar was among a handful of South African players who were released back to their provinces by Springbok coach Peter de Villiers at the end of the away leg of the 2010 Tri-Nations campaign.

One of three South African players signed in the summer by Ulster – Johan Muller and Pedri Wannenburg have already linked up with their new team mates in Belfast – Pienaar is due to join the Irish side on 1 September.

His new employers had given him the green light to play in the Springboks’ final Test in the Tri-Nations against Australia in Bloemfontein on 4 September, but his potential involvement in both that game and the other home clash with the Wallabies in Pretoria on 27 August are now in doubt.

So, too, is his availability for the third meeting of the championship with the unbeaten All Blacks at Soweto’s Soccer City stadium on 21 August. That game is due to be the 100th Test outing for Pienaar’s Sharks team mate John Smit.

The injury could take as long as six weeks to recover, which could see him miss the mouthwatering Magners League Round 1 match with the Ospreys at Ravenhill and perhaps the away game against Italian newcomers Aironi Rugby the following weekend.

The Ospreys had seven players on the 2009 tour to South Africa – Lee Byrne, Shane Williams, Tommy Bowe, James Hook, Mike Phillips, Alun Wyn Jones and Adam Jones – and six of them faced Pienaar in the series.