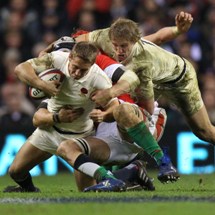 England will face Wales and Ireland in World Cup warm-up matches next year.

Martin Johnson’s men will take on Wales in a double header before traveling to Dublin for their final preparations for the seventh World Cup which begins in September 2011.

Johnson, who has been England team manager since 2008 having skippered his country to World Cup glory five years earlier, believes competitive fixtures provide the best way for his players to get ready for the global gathering.

"It is going to be tight but, with Argentina as the first game we felt we needed a game two weeks before, not three weeks before," said Johnson, whose men have been drawn alongside Scotland, Georgia, Argentina and either Uruguay or Romania.

England will begin the three warm-up games in Cardiff on August 6 before hosting Wales at Twickenham on August 13, with the Dublin encounter against 2009 Grand Slam champions Ireland taking place at the new Aviva Stadium a fortnight later on August 27.

Those fixtures will follow on from the 2010 Six Nations which takes place in February and March and this autumn’s Investec internationals against New Zealand, Australia, Samoa and South Africa in November.

Johnson admits that his squad face a hectic schedule but he is confident that the RFU’s agreement with the clubs means that they will be in good shape come September next year.

"There won't be much pause for breath between now and then. This time next year we will be playing warm-up games for the tournament," added Johnson.

"We don't go on tour next summer so we get a rest at the end of the season.

"The guys in the EPS (elite player squad) get their breaks as in the agreement. There are seven Saturdays during the season they won't be playing.

"We also have the ability to make sure they don't play if we don't think they are fit.

"It has worked pretty well and if you look at the number of games the guys have played not many have been 30-plus over the last two years. Our guys work incredibly hard making sure they stay fit."