The best loose head around?

Scotland's Allan Jacobsen have missed out on the 2009 Lions tour to South Africa but he is now being touted as the best loose-head prop in the world. [more] 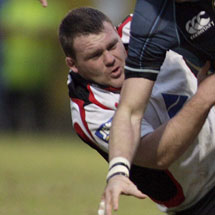 Scotland’s Allan Jacobsen have missed out on the 2009 Lions tour to South Africa but he is now being touted as the best loose-head prop in the world.

Jacobsen has close to 50 international caps to his name and was discussed as a potential Lion ahead of last summer’s series with the Springboks.

But while his Scottish front-row partner Euan Murray made the tour as a tight-head, Jacobsen was overlooked in favour of Gethin Jenkins and Andrew Sheridan.

Since then, the 31-year-old veteran has continued his good form, bouncing back from that disappointment with a season of consistently impressive form for both club and country.

Jacobsen is currently preparing for what will be his 10th season of Magners League rugby having made his debut way back in 2001/02 campaign, and, despite having made his Edinburgh debut some 13 years ago, Jacobsen’s star continues to rise.

Scotland’s scrum coach Massimo Cuttitta has no doubt that Jacobsen is reaching the peak of his powers and could remain a significant force in the global game for years to come.

"Allan is the best in the world along with the Australian loose head (Benn Robinson),” said former Italian international Cuttitta.

"He has improved so much, particularly the way he bores in at scrums – he's killing people nowadays.

"A lot of the time newspapers focus on Moray Low or Euan Murray at tight-head prop and praise them, which is fair enough.

"But the front row is a team effort and for them to really perform requires Allan to be working hard as well.

"A lot of it is to do with competition, with Dicko (Alasdair Dickinson) pushing him hard and that can help ensure Allan is, in many ways, just at the beginning of showing what he can really do."