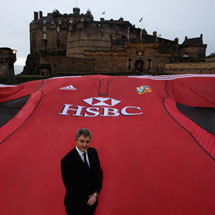 The ex-Scotland star, who is currently chairman of the British & Irish Lions Committee and a former president of the Scottish Rugby Union, will step into his new role on September 1.

Irvine, who was a Lion in 1974, 1977 and 1980, replaces John Hussey of the Irish Rugby Union, who has acted as Celtic Rugby chairman for the past seven years.

His appointment comes on the eve of the 10th season of Magners League Rugby – the Irish, Scottish, Welsh, and now Italian, tournament run by Irvine’s new employers.

"As the Magners League prepares to expand through the introduction of two Italian teams to join the 10 clubs from Ireland, Scotland and Wales, I am delighted the Celtic Rugby Board has recognised there is a growing need to support the Tournament's expansion," said outgoing chairman, Hussey.

"Last season saw the highly successful introduction of a Play-Off system and Grand Final to determine our champions and the changes agreed by the Board are aimed at continuing to shape the ever growing reputation of the Tournament.

"Having a man of the calibre of Andy Irvine to take over from me is a real statement of intent from the Celtic Rugby Board and all the changes we have agreed will help support the growth of the Magners League product and our 12 clubs."

In addition to the appointment of Irvine as a non-voting chairman at the head of an eight-man Board of Directors, John Feehan has been appointed chief executive of Celtic Rugby following the re-structuring of the Magners League organisation.

This means the tournament will now be managed out of the same Dublin office in charge of both the Lions and the RBS 6 Nations Championship.

Feehan, who is currently chief executive of both the 6 Nations and the Lions, will head up a team that will include 10 permanent members of staff, including the long-standing tournament director, David Jordan.

"It is my desire to do everything I can to see the Magners League competition reach its fullest potential," said Feehan.

"Not only do I believe that the competition can be pushed further, I think that my team and I are uniquely qualified and ideally situated to make that a reality.

"The taking on of the Magners League will undoubtedly pose a few challenges, but I know I speak for all of us in saying that we are ready to face them and are looking forward to getting involved with the game at club level."