Australia will have to get tougher if they are to mount a serious challenge at next year's World Cup. [more] 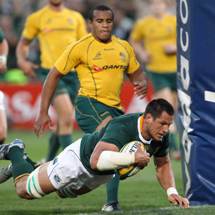 Australia will have to get tougher if they are to mount a serious challenge at next year’s World Cup.

That’s the view of head coach Robbie Deans following another Tri Nations defeat at the weekend.

The Wallabies are in line to pick up the tournament’s version of the Wooden Spoon after throwing away a 21-7 lead in South Africa on Saturday.

Deans saw his men register 14 points inside the first five minutes in Pretoria before eventually falling to a 44-31 defeat to a Springbok side that had lost their previous four Tests.

And with the latest global gathering now just over a year away, Deans has admitted that his side have plenty of work to do if they are to come close to repeating the country’s two previous successes.

"What that loss came down to was unnecessary lapses," Deans told The Sydney Morning Herald.

"We've got to start with ourselves obviously and each and every one of us has to start with what part we played in it. If we don't start there then there will be no change."

"In the game, there were elements which were good, but some of the old elements of our play came back.

"You've got to put that down to the ability of the players to drive each other to keep their minds on the task. This team is not yet tough enough."

Deans’ comments come on the back of a third straight Tri Nations loss after the Wallabies had opened their campaign with a promising 30-13 win over the Boks in Brisbane in late July.

And it’s not just the former Crusaders coach who was far from happy with the display at Loftus Versfeld.

Ex Wallabies skipper Nathan Sharpe gave his own blunt assessment of the inability to turn a healthy lead into a morale-boosting victory, as did current captain Rocky Elsom.

"The feeling in the team is it is very well achievable, the goal of winning on the high veldt, and that's what we want to do this weekend.

"We've got to shelve the disappointment and make it work for us in terms of even greater motivation but we can't compromise ourselves and get a terrific start like that then not capitalise on it."

"On both of our set pieces we didn't perform in the way we wanted to, our drilling wasn't up to where it should be and we were below our best, which is pretty hard to take given that we've had a bit of time to prepare for this," added Elsom.

"We can't really have that volatility because it's not as if we're playing some of the lesser sides in the world.

"If it wasn't clear before it's very clear now that our game-plan and the patterns that we run work for us. What we need to do is support that by providing a stable platform for it."