Sale Sharks will begin the coming season with a new skipper who is already being tipped as a possible Lion in 2013. [more] 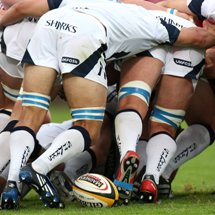 Sale Sharks will begin the coming season with a new skipper who is already being tipped as a possible Lion in 2013.

James Gaskell may not have played for England just yet but his form last year suggests he can’t be too far away from being given an opportunity at the highest level.

And with the next Lions adventure taking place on the hard, fast grounds of Australia, Gaskell could follow Tom Croft in moving from an unknown youngster to a Lions Test star in next to no time.

Gaskell will become the youngest skipper in Sale’s history when he leads the team out in their Aviva Premiership opener against Newcastle Falcons on Friday night.

At just 20 years and 106 days old, he will beat the club’s previous record set a decade ago by Alex Sanderson.

“I noticed James was a born leader when we started training in June,” said Sale’s new head coach Mike Brewer.

“He's not too young for the job. I want someone who can lead from the front and make decisions, and he is a bright enough lad to do that.

“He's not ready for international rugby yet but we want to break him into the Saxons squad this season.

“He's nowhere near the finished article but I wouldn't rule him out of going to the World Cup because that is 13 months away.”

Gaskell was named Sale’s Breakthrough Player of the Year last season, less than two years after making his first-team debut against Cardiff Blues in October 2008.

The former England Under 20 international made 21 appearances for Sale in 2009/10, scoring four tries and earning plenty of praise throughout the English game.

Gaskell takes over from Dean Schofield who left for RC Toulon during the summer.