Bowe can get even better

Lions skipper Paul O'Connell has compared Tommy Bowe to one of the greatest Lions of the modern era. [more] 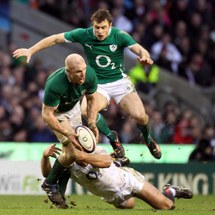 Lions skipper Paul O’Connell has compared Tommy Bowe to one of the greatest Lions of the modern era.

O’Connell, who toured South Africa with Bowe last summer, believes the Ospreys and Ireland wing is in the same mould as legendary Lion Brian O’Driscoll.

Bowe started all three Tests for the 2009 Lions, featuring twice on the wing and once at outside centre as he cemented his standing as one of the most potent players in the global game.

He then enjoyed another hugely successful season last time out, winning both the Irish and Welsh Professional Players’ awards before scoring the first try in the Ospreys’ Magners League Grand Final triumph over Leinster in Dublin at the end of May.

The 26-year-old was unsurprisingly chosen in the Magners League Dream Team alongside fellow Lions O’Driscoll, James Hook, Gethin Jenkins, Adam Jones and Jamie Heaslip and was last month named the Magners Players’ Player of the Year at an awards dinner in Cardiff.

And despite such a high level of success, O’Connell believes Bowe has plenty more to offer, hinting that he could take on O’Driscoll’s role as Ireland’s talisman when the Leinster centre decides to call it a day.

"Tommy had a great season for the Ospreys and Ireland last year and he's becoming a leader," said O’Connell.

"He's been scoring tries for fun. His strike-rate is great but he's now a go-to player as well.

"Tommy has been a marked man for a while yet he is doing well.

"He's such a clever player, like Brian O'Driscoll and he will keep getting better as he gains more experience."