The man who led South Africa to a series triumph over the Lions last summer must now wait for a full review of a disappointing Tri Nations campaign before he knows whether he still has a future with the Springboks. [more] 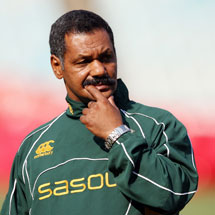 The man who led South Africa to a series triumph over the Lions last summer must now wait for a full review of a disappointing Tri Nations campaign before he knows whether he still has a future with the Springboks.

Head coach Peter de Villiers was in charge of the World Champions for the recent success against Britain and Ireland’s elite, with the Boks going on to wrestle the Tri Nations title from New Zealand as they raced to the top of the global standings.

The Boks finished bottom of the southern hemisphere’s premier competition with just one win in six attempts after they closed their campaign with a 41-39 defeat at home to Australia.

Public outcry as to the poor showing of the Boks has now brought a response from the South African Rugby Union who insist they will be undertaking a thorough review into their side’s Tri Nations failings.

"Rugby followers are extremely disappointed with results in the Tri-Nations as are the Springbok team and management," said SARU president Oregan Hoskins.

"We take the situation very seriously but there is a process in place and we will follow that through.

”SARU will make no further comment until the review process is complete."

De Villiers’ future has been the subject of almost constant speculation over recent weeks and months, with the former Baby Bok boss coming under increasing pressure following a hat-trick of defeats to the All Blacks and two losses to the Wallabies.

Throw in a number of outspoken and ill-judged remarks on topics as wide as Schalk Burger’s gouging of Lions wing Luke Fitzgerald and the recent arrest of Bulls prop Bees Roux on suspicion of murder, and de Villiers’ position is looking decidedly shaky.

De Villiers reportedly upset the SARU last week when he told a news conference that the Springboks extended "100 per cent" support to Roux following accusations that he beat a Pretoria policeman to death.

De Villiers made no comment about the policeman, reportedly battered to death in the early hours of the morning in a suburban street, and Hoskins later said he had written to the family of the deceased offering support and condolences.