James Hook could yet feature at fly-half in next year's World Cup. [more] 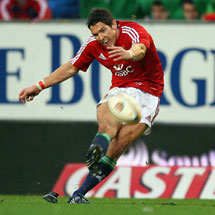 James Hook could yet feature at fly-half in next year’s World Cup.

The 2009 Lion could take over from fellow tourist Stephen Jones in the No10 shirt according to Wales coach Warren Gatland.

Hook has slipped to third-choice in the current pecking order behind Jones and youngster Dan Biggar, with Gatland employing the 24-year-old at full back and centre.

Hook has excelled in the latter role, winning man-of-the-match honours at outside centre despite initially being unfamiliar with the position.

But while most people expect him to remain in that position at least until Test Lion Jones announces his international retirement, Gatland has suggested a shock move back to 10 could still be on the cards.

“Ideally you would like James playing at 10 and getting some game time there with his region. But it is not a prerequisite,” Gatland told the Western Mail.

“We know he is still an option for us and I’ve spoken to James about that. Playing him at 10 isn’t beyond the realms of possibility.

“With James, we know how talented he is and want him on the field, whether it is in midfield, at full-back or at 10, because he is a special player who is able to create things.

“We have the option of picking two specialist 10s in the squad and then having James as someone who we may use there.”

He spent the vast majority of last season in midfield for his region and director of coaching Scott Johnson and head coach Sean Holley have made no attempt to disguise the fact that they see him featuring there again this year.