Jake White has handed a 'come and get me' plea to the South African Rugby Union. [more] 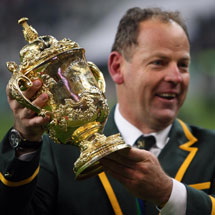 Jake White has handed a ‘come and get me’ plea to the South African Rugby Union.

The man who led the Springboks to World Cup glory in 2007 says he is ready to try and do the same at next year’s global gathering if the SARU want him to take over from Peter de Villiers..

But De Villiers’ reign could be about to come to an end after the SARU announced it was undertaking an extensive review of the recent Tri Nations campaign in which the Boks finished bottom of the pile.

De Villiers has been under intense pressure following a series of poor results, while his tendency to court media controversy is adding to his growing unpopularity.

And White, who hasn’t held a full time senior coaching post since leaving the Boks, has made no secret of the fact that he is desperate to take over from de Villiers should the SARU decide that now is the time for a change.

"I can't bear to watch the Springboks playing like this anymore," White told The Times.

"I'm ready to do a hospital job and coach the Springboks to the World Cup in 2011 if the South African Rugby Union wants me.

"I've already made contact with SARU president Oregan Hoskins but he keeps telling me he has to run the idea past the executive council.

”Well, I'm saying I'm available because what we've seen with the Springboks in the past 10 months is worrying."

While no decision has yet been made by the SARU, White appears confident that he may soon receive the call after he admitted that he had already put plans in place regarding the appointment of his backroom staff.

The 47-year-old worked with former Wallaby boss Eddie Jones at the last World Cup and White believes that partnership could achieve similar success in 2011.

"Fitness coach Derik Coetzee is also willing to come on board.

"None of us are locked into any contracts with other clubs or countries. We could start next week if the SARU wanted."