Australia threw away a comfortable 22-9 lead in the last 13 minutes as New Zealand powered back to inflict a 10th straight victory over the home side in the Tri Nations finale. [more] 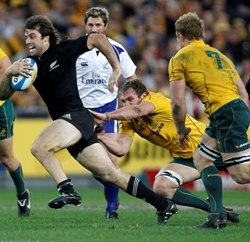 Australia threw away a comfortable 22-9 lead in the last 13 minutes as New Zealand powered back to inflict a 10th straight victory over the home side in the Tri Nations finale.

The All Blacks had already wrapped up the Tri Nations and Bledisloe Cup crowns ahead of their visit to Sydney but they faced a confident Wallabies side following their dramatic victory in Bloemfontein over South Africa the weekend before.

Australia, who host the Lions in the summer of 2013, drew first blood in a competitive opening exchange with James O’Connor touching down after Ben McCalman’s break had dented the New Zealand defence.

Two penalties apiece from Matt Giteau and Piri Weepu gave Australia a 14-6 lead at half time and back-to-back Tri Nations victories looked on the cards.

Adam Ashley-Cooper extended the home side’s lead soon after the break, powering his way over the line after Will Genia’s pass found the winger out wide.

Giteau’s form with the boot failed to put New Zealand to bed, however, and the centre handed over the kicking responsibilities to Kurtley Beale after his fourth miss at the uprights.

A change at fly-half saw a rise in tempo for the visitors and captain Richie McCaw broke free to score and Weepu converted, adding to his earlier second-half penalty to bring the scores to within six.

New Zealand continued to dominate upfront and Kieran Read powered his way over to score, with Weepu adding the conversion with just four minutes remaining to record a Tri Nations whitewash.

Australia’s 41-39 victory in South Africa seven days earlier had cemented second place in the table but, with just two victories to their name, they finished a distant 16 points behind the All Blacks and Australia coach Robbie Deans, was full of praise for the champions.

“They're clever, the way they stay a step ahead," said Deans.

"There's no doubt we've made progress but, in the terms of the benchmark, we are just under the brow. If we can all make little incremental gains then collectively that will be significant and clearly we are not that far away.”