Martin Johnson is confident England can raise their game when they face the might of the southern hemisphere this autumn. [more] 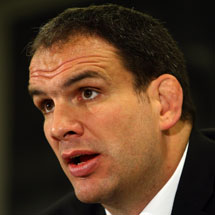 Martin Johnson is confident England can raise their game when they face the might of the southern hemisphere this autumn.

As Johnson continues his preparations ahead of next summer’s world cup, he will look to build on England’s impressive defeat of Australia in June when the challenge of all three Tri-Nations sides as well as Samoa comes to town in November.

England kick of the series against recently crowned Tri-Nations champions New Zealand at Twickenham, the All Blacks coming off the back of an emphatic whitewash over South Africa and the Wallabies.

"I'm not fazed by what I've seen in the Tri-Nations, but what I've told the players is that we have to get back to Test match intensity from the start," said Johnson.

"When you play these guys they have the ability to score points quickly so we have to be right on our game from the start. You have to be able to handle 80 minutes of pressurised Test rugby to beat New Zealand. That is no secret.

"A lot of guys understand after Sydney what it takes to win with an 80-minute performance. It would be good for us to have real continuity in what we did from the Six Nations through the summer tour and into November."

The England manager believes his players are the fittest they have been under his reign thanks in part to new technology.  Former Lions captain Johnson and the RFU showed of the Global Positioning System the squad have been working with this week, a device that enables the coaching team to measure an individual’s speed, distance travelled and heart-rate as well as assessing a players’ health by detecting an illness or injury.

The technology allows training to be tailored more specifically to individuals and is already in use by the majority of Aviva Premiership sides.

"The guys came in recently and were (fitness) tested and the results were the best since I've been here," Johnson added.

"Some of the guys had world-class statistics a year ago but others who weren't quite there have improved.

"Last summer I thought that we could improve our fitness in certain areas. It wasn't unsatisfactory a year ago, but it's definitely better now and it needs to be. You hear a lot from around the clubs that guys are in good shape and working harder. Fitness-wise we are up there now, but the key thing is what the score is when we play teams like New Zealand."