Ali Williams has put Europe's top teams on red alert after the injury-plagued All Black star revealed he wants a move to the northern hemisphere. [more] 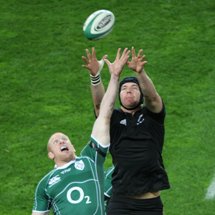 Ali Williams has put Europe’s top teams on red alert after the injury-plagued All Black star revealed he wants a move to the northern hemisphere.

Williams is eyeing up a short-term deal on European shores to aid his recovery from a long-term Achilles injury.

And the 61-capped lock hopes a switch to the northern hemisphere will also help his bid to win a New Zealand recall in time for next year's World Cup.

"I just want to play rugby”, said Williams, 29, who featured against the Lions five years ago.

“The World Cup is my goal and I'm desperate to get my hands on that trophy.

"If the World Cup wasn't around the corner I'd go and do something else.

"I'm not bothered about the money or which club I join. I know in my head a move is going to work for me."

Williams has not played for the All Blacks since the 32-6 victory against England in 2008 following a series of injury problems.

The Auckland Blues second-row will be available for three months between November and January before pre-season training starts for the new Super 15 season.