Godman out for six months

Scotland fly-half Phil Godman has been ruled out for six months after tearing his anterior cruciate ligament in training. [more] 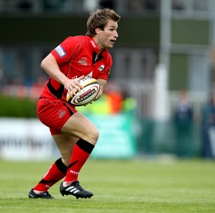 Scotland fly-half Phil Godman has been ruled out for six months after tearing his anterior cruciate ligament in training.

The 28-year-old will miss the autumn international series as well as the Six Nations and faces a race against time to prove his fitness ahead of the World Cup next summer.

Godman damaged his right knee on Tuesday whilst training with Edinburgh and scans assessed by his club and national team doctors revealed the extent of the injury yesterday.

"He will have to undergo surgery in due course to repair the knee ligaments but the Edinburgh and Scotland medical teams will be working to deliver him ready to be considered for selection for the Rugby World Cup squad next year.

"There are many examples of players returning to full international duty having sustained this kind of injury. From our own national squad, Jason White and Nathan Hines have both recovered to play a full part in international rugby after ACL damage."

Godman won his 23rd international cap in last season’s Calcutta Cup draw against England but had to settle for a role off the bench after losing his starting berth to Dan Parks.

Parks looks set to continue wearing the number 10 jersey as Scotland kick off their November fixtures against Tri-Nations champions New Zealand on Saturday, November 13, with Glasgow’s Ruaridh Jackson providing the most likely competition at outside-half.