A total of 10 Lion tourists will go head-to-head this afternoon when Leinster take on Munster at the Aviva Stadium. [more] 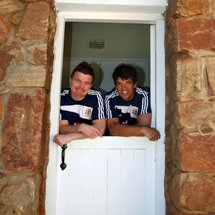 A total of 10 Lion tourists will go head-to-head this afternoon when Leinster take on Munster at the Aviva Stadium.

It will be the first Magners League tie to be held at the new Lansdowne Road and it is set to smash the current record attendance with a 51,700 sell-out crowd expected.

Leinster go into the game with the bragging rights and they will be looking to make it five wins out of the last five encounters between the two teams.

But the Dublin-based province have got off to a shaky start in the Magners League with only one win in four games having lost out to Glasgow, Benetton Treviso and Edinburgh.

Munster, on the other-hand, go into the game on the crest of a wave and seeking making it five out of five in the league so far.

The Red Army have so far dispatched everyone put in front of them including the Ospreys and the Scottish duo that put Leinster to the sword.

"Obviously we'll have looked back on those Leinster games, but it's their recent stuff that is relevant to this game", said Munster captain Dennis Leamy.

"They'll get no points for what they did last year. The points that are on offer are for this one."

"They've had a slow start. We've had them ourselves. But if you look at the best bits of how they've played in those games you can see their quality. They're a good side and I wouldn't expect there to be anything in it."

Those sentiments were echoed by Leamy's Ireland team-mate O'Driscoll, who has made 14 appearances for the Lions, but he has admitted Leinster have a point to prove after their poor starting to the season.

"Munster are the ones who have brought good form into the fixture", said O'Driscoll, who skippered the Lions in 2005 and also toured in 2001 and 2009.

"We feel we have left a lot of out best rugby behind us. We have points to prove as players. We haven't become a bad team overnight.

"We feel if we play to our potential we will give any one a run for their money including Munster."

Of the 10 Lions in the game, seven are in the Leinster ranks and three will feature for Munster.

The visitors also include Tomas O’Leary and Alan Quinlan, both of whom were original selections for the 2009 tour before they were ruled out through injury and suspension.