O’Leary out for two months

One of the unluckiest members of Ian McGeechan's original 2009 Lions squad has been dealt a further blow with the news he will be out of action for up to two months. [more] 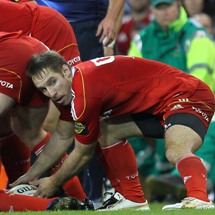 One of the unluckiest members of Ian McGeechan’s original 2009 Lions squad has been dealt a further blow with the news he will be out of action for up to two months.

Tomas O’Leary had been one of the form scrum-halves in 2009 but, just days after being named in the touring party to South Africa, the Munster-man broke his ankle in a Magners League tie against the Scarlets.

Now two seasons on and on the eve of the Heineken Cup, the 26-year-old has come in for more bad luck.

The Ireland No9 suffered a thumb injury which will sideline him for between six and eight weeks.

He is certain to miss the first two rounds of the Heineken Cup, which kicks off this weekend when Munster take on London Irish, and up to three Magners League ties.

The injury also makes him a major doubt for Ireland’s autumn series with only the final test against Argentina falling after the eight week window.

The news is a further blow for Munster after they saw centre Lifeimi Mafi handed a seven-week suspension that rules him out of action until November 22.

But the Red Army have strength in depth at scrum-half and can call on veteran Ireland international Peter Stringer and 24-year-old Duncan Williams to fill the void.