England have received a boost ahead of next month's autumn internationals with the news that Toby Flood will return to action this weekend. [more] 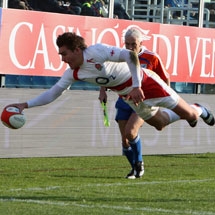 England have received a boost ahead of next month’s autumn internationals with the news that Toby Flood will return to action this weekend.

The Leicester fly-half has been sidelined for more than six weeks with damaged knee ligaments but will now be available for the second round of the Heineken Cup.

Flood had been due to start last Saturday’s narrow victory over Benetton Treviso in Italy but the 25-year-old was forced to pull out on the morning of the game.

The former Newcastle star was deemed ‘not quite ready’ for that European encounter but Leicester director of rugby Richard Cockerill has made it clear that he will start Sunday’s clash with the Scarlets at Welford Road.

"Toby was close to playing last week but we didn't want to risk him for obvious reasons," Cockerill told the Leicester Mercury.

"We have had Toby for only 30 minutes so far this season. He is world class and it is a huge boost having him back.

"He is right up there with the likes of Dan Carter, Matt Giteau and Quade Cooper.

"Who is better than those? Not many. Flood is a very good player. He trained on Monday and Tuesday and having him back gives everyone a lift."

Flood’s recovery is a massive plus for England team manager Martin Johnson as he continues his preparations for the November Tests with New Zealand, Australia, Samoa and South Africa.

Flood is the man in possession of England’s No10 shirt having impressed on the summer tour.

But with Jonny Wilkinson in fine form for Toulon, Flood faces stiff competition to hold on to his place, with his chances of doing so lessening dramatically if he had been forced to miss another week or two of action.