Czekaj gutted to miss out

Chris Czekaj has expressed his disappointment at failing to make the Wales squad for the autumn internationals. [more] 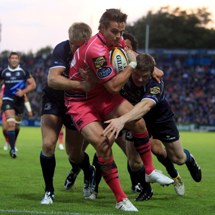 Chris Czekaj has expressed his disappointment at failing to make the Wales squad for the autumn internationals.

The 24-year-old had been enjoying some fine form for Cardiff Blues this year slotting in at wing and fullback.

He had been tipped to make the squad on the back of his impressive performances in the Magners League and Heineken Cup but missed out on selection in Warren Gatland’s 33-man party.

"I was bitterly disappointed hearing I was not in the squad," said Czekaj who suffered an horrific leg break on Wales’ tour to Australia in 2007.

"I didn't hear anything only the announcement on TV. It's been a while since I've been around the Autumn and Six Nations squads. It's a great feeling to be in the Welsh squad, it gives you a huge boost.

"So I’m disappointed not to be in it. The best I can do is play to my best on Friday and show them that they've perhaps made a mistake."

The Blues take on the Scarlets in an East versus West Wales derby tomorrow night, with Czekaj set to line-up at fullback after Ben Blair took a knock to the knee in defeat at Castres.

"There are always a lot more nerves before the derbies. They have been good so far this season and we're expecting a really physical game from them," added Czekaj.