Scotland will be without flanker Alasdair Strokosch for next month's autumn internationals. [more] 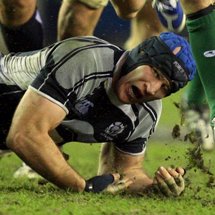 Scotland will be without flanker Alasdair Strokosch for next month’s autumn internationals.

The 27-year-old damaged knee ligaments last weekend and is expected to be sidelined for six weeks.

Strokosch suffered the injury in the closing stages of Gloucester’s Aviva Premiership win over Harlequins at Kingsholm on Saturday.

“We wish Alasdair a speedy recovery. We may yet draft another player into the squad for our training camp in St Andrews next week and we’ll discuss that after the matches this weekend,” said Scotland head coach Andy Robinson.

Robinson’s men take on the All Blacks and the Springboks at Murrayfield on Saturday, November 13 and 20 respectively, before facing Samoa at Pittodrie Stadium in Aberdeen on November 27.

They will be looking to build on a famous win over Australia this time last year and an historic summer triumph over the Pumas in Argentina but they will have to do so without a number of senior internationals.