Lewis Moody is among nine players being released by England in order to play club rugby this weekend. [more] 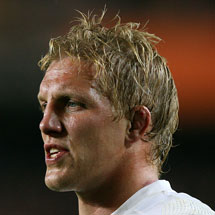 Lewis Moody is among nine players being released by England in order to play club rugby this weekend.

The decision to release players for Aviva Premiership fixtures the week before an international is usually suggests they are set to miss out on a Test place, but in Moody’s case his release hints at the opposite.

Moody suffered eye damage in Bath’s defeat to Gloucester at the beginning of the month and was seen as a serious doubt for the autumn series opener against New Zealand a week on Saturday.

The fact that Moody will now feature for his new club against Harlequins at The Stoop means his chances of facing the Al Blacks appeared to have improved.

The 2005 Lions tourist led England in their final Six Nations clash with France and the summer tour Down Under earlier this year and, as long as he comes through Saturday’s game with Quins without any further complications, he remains the favourite to continue in that role this November.

While Moody will be more than happy to be involved for his club this weekend, the other eight players released by England are likely to be disappointed as it suggests they will miss out on a place in the matchday 22 to take on the All Blacks.

Leicester’s George Chuter, Quins’ Joe Marler and Tom Wood of Northampton are the other players to be made available for their clubs.