South Africa have been hit with another major injury blow after Schalk Burger and Juan de Jongh were ruled out of their Grand Slam tour of Britain and Ireland. [more] 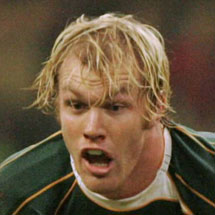 South Africa have been hit with another major injury blow after Schalk Burger and Juan de Jongh were ruled out of their Grand Slam tour of Britain and Ireland.

Scans have revealed that injuries sustained during Saturday's Currie Cup final were worse than initially feared.

Burger, capped 63 times for the Springboks, has a broken rib, while the six-times capped De Jongh suffered a hairline fracture to his left ankle.

The news comes just hours after Ricky Januarie was also ruled out of the squad with a knee injury.

Burger, who played in the second Tests against the 2009 Lions and was subsequently cited, has been replaced by the uncapped Bulls loose forward Deon Stegmann, while Adi Jacobs takes De Jongh's place in midfield.

Bulls fullback Zane Kirchner has also been added to the squad.

The World Champions begin their tour with a match against Ireland at the new Aviva Stadium on Saturday, before facing Wales, Scotland, England and the Barbarians on successive weekends.

"It's a blow to lose players but we've rolled with the punch and already moved on," said head coach Peter De Villiers.

"We trained without them this morning and we already had contingency plans in mind which we've begun to put into operation. It's not an ideal situation but we've all got on with our jobs and are focused only on the players that we have in camp."

Flanker Willem Alberts, hooker Chiliboy Ralepelle and centre Jean de Villiers all took no part in any of the Springboks’ training. The spate of injuries means the team announcement for the Irish Test has now been delayed until Thursday.

"We'll give the players some more time in rehab before we confirm the team," continued De Villiers.

"We have the line-up in mind but want to make sure everyone's okay before making the announcement.”