Ricky Januarie has been ruled out of South Africa's Grand Slam tour of Britain and Ireland after picking up a knee injury in Western Province's Currie Cup final defeat to the Sharks on the weekend. [more] 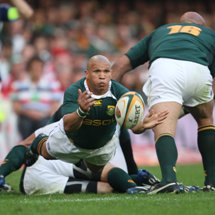 Ricky Januarie has been ruled out of South Africa’s Grand Slam tour of Britain and Ireland after picking up a knee injury in Western Province’s Currie Cup final defeat to the Sharks on the weekend.

Januarie had to contend with a place on the bench during the Lions tour of South Africa in 2009 but did make a cameo appearance in the first Test.

With Fourie du Preez already out of the November internationals, Januarie was expected to feature heavily for the World Champions. But the live-wire scrum-half has been dealt a blow after picking up the injury in his domestic side's 30-10 defeat in Durban.

The scrum-half was forced from the field after only half-an-hour at the ABSA Stadium and consultation with Springbok doctor Craig Roberts has confirmed that he be unable to take part in the Tests against Ireland, Wales, Scotland and England and the end-of-tour clash with the Barbarians.

Bulls No. 9 Francois Hougaard and Ulster utility back Ruan Pienaar are the other scrum-halves available, with a decision on whether further cover is required set to be made at a later date.

De Villiers is carrying a groin problem while de Jongh has an ankle injury, with both set to be assessed before a decision on whether Jacobs will tour is taken.

"We will monitor Juan and Jean's progress in the next couple of days," said Peter De Villiers.

"We have had a number of injuries among our senior centres so we decided it was essential to have some experienced cover on hand and in the group just in case."