Sonny Bill Williams will make his much anticipated debut for New Zealand when they take on England on Saturday. [more] 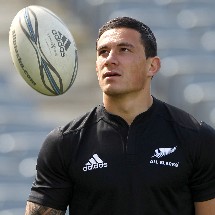 Sonny Bill Williams will make his much anticipated debut for New Zealand when they take on England on Saturday.

The 25-year-old is one of four changes to the side that was beaten by Australia last weekend.

And the powerful centre is eager to pull on the famous All Black jersey and run out on to the Twickenham pitch.

"I don't consider myself an All Black until I've played a game so I'm definitely itching to get out there," said Williams.

He replaces Conrad Smith to form a devastating centre partnership with Ma'a Nonu who made one appearance against the Lions, as a substitute in New Zealand's  48-18 second Test victory during the 2005 tour.

But all eyes will be on Williams, who ironically lines-up against his former New Zealand rugby league team-mate Shontayne Hape.

Williams switched to rugby union after signing a lucrative contract with French big-spenders Toulon before joining Canterbury in the summer targetting a place in the All Blacks' 2011 World Cup squad.

He becomes New Zealand's first dual-code international since Marc Ellis, an All Black from 1992-1995.

New Zealand have won their last eight Tests against England and have not lost an international to one of the Home Nations since a 31-28 defeat at Twickenham in 2002.

The game against Martin Johnson's men at Twickenham is the first game of New Zealand's Grand Slam tour. After England ,the All Blacks travel to Murrayfield to take on Scotland before games with Ireland and Wales.