Fresh from news of his retirement, we take a look back at the career of double Lions tourist Phil Vickery. [more] 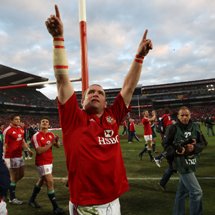 Fresh from news of his retirement, we take a look back at the career of double Lions tourist Phil Vickery.

The 34-year-old called it quits last week as he brought the curtain down on his outstanding contribution to the sport in frustrating circumstances.

Vickery was been forced to call time on an illustrious career after suffering yet another neck injury.

The London Wasps prop had already recovered from four operations but was told by doctors that he now risked serious injury if he continued playing following his latest setback.

Vickery was expected to become a double Lions tourist when Sir Clive Woodward selected his squad for the 2005 tour to New Zealand but injury preventing him from travelling to the Land of the Long White Cloud.

Despite numerous further injury concerns, Vickery fought back to win a place in the 2009 Lions squad to tour South Africa.

He went on to make two Test appearances for Britain and Ireland’s elite against the Springboks, ending his Lions career on a real high with victory over the World Champions in Johannesburg.

As well as winning five caps for the Lions, 'The Raging Bull' made 73 Test appearances for England. Vickery made his international debut against Wales in 1998 and went on to represent his country at the following year's World Cup.

A member of England's triumphant starting XV in the World Cup Final in Sydney four years later, Vickery helped banish some of the disappointment of the Lions' third Test defeat to the Wallabies in the same city in 2001.

Despite the magnitude of that success, Vickery has himself spoken of an even greater sense of pride when he skippered his country to the World Cup Final in 2007 at a time when England had been written off as no hopers.

Devon-born Vickery played his club rugby with Gloucester between 1995 and 2006, making close to 150 appearances before moving to Wasps four years ago.

He went on to win English Premiership and Heineken Cup titles with the Adams Park club but played his last game on September 25, ironically back at Gloucester where his career had started 15 years earlier.

"It was a massive event. In 2001, I was 24 so still reasonably young and it was something I always dreamed of. I watched Lions tours as a young man and I never really thought I would be involved in one.

"It was fantastic, playing with Keith Wood and Tommy Smith. Obviously Dai Young was around and Scott Gibbs came out in the end, Brian O'Driscoll etc. There were a lot of big names and I thoroughly, thoroughly enjoyed it.

"I thoroughly enjoyed the tour, although ultimately it finished in disappointment with losing the final Test match and losing the series."

"The first Test in Brisbane at The Gabba is probably one of my greatest rugby memories and experiences. It was just phenomenal and I'd never experienced anything like it. The support, the euphoria, the expectations, the pressure, the history and everything that surrounds the Lions makes it just a phenomenal thing to be involved in."

A varied tour: Vickery enjoys a trip to the set of Neighbours in 2001

"You couldn't go anywhere without being stopped. I think I've got a pretty good relationship with all supporters, whether they are English, Scottish, Irish or Welsh but being embraced and being part of that with the Lions was truly a privilege. It was something I thoroughly enjoyed and was very pleased to be a part of."

"When you're asked to be captain you say, 'fantastic’. Then, within two seconds, you think, 'Shit, this is quite a big deal.'

"When you play for the Lions you're carrying the dreams and frustrations of millions of people. Sometimes you have to remember that there are a hell of a lot of people who are right behind you and want you to do well.

"When you're in this environment it's a small bubble. You can get carried away and the most trivial little things become a real big problem. It's important to step outside it, realise what you're part of and to enjoy it.

"Since joining Wasps I've captained England to a World Cup final, won 30 or 40 more England caps and been asked to be captain of the Lions. This is the most unbelievable experience and I can honestly say it has far surpassed anything I thought I'd reach again.”

"It was a fantastic day. We won the match and that was all that was important to me.

Phil Vickery tatsed Test glory with the Lions in Johannesburg

“Geech’ gets the best out of you because he trusts you to do the right things. Nobody went over the mark and everyone respected the rules, and it was nice and refreshing to be on a tour where people wanted the best for you.

“The management told us just because we’re the Lions we didn't have to be tee-total. As long as we did our prep work they didn't have an issue with us going out for dinner or drinks. It was like 'Christ, we're actually being treated like adults.

"I've done two Lions tours and I think Warren Gatland would be a fantastic candidate to do it again. And I hope he does. He's a guy who I have the utmost respect for.

"Warren's a typical Kiwi. He's honest, sometimes brutally, but you can be honest back. He gets the guys together and gets the best out of people. I really hope he does it again because it's very, very special."

"It was a great tour, one which I certainly won’t forget in a hurry. I’m very, very proud of the guys. Ultimately, we’ve lost the series but we’ve taken home a huge amount of pride.

"The Boks certainly deserve their series victory – they’ve had two good wins. But we’ve held ourselves together and I think we can go home and hold our heads high.

"I just hope and pray that Lions tours will always go ahead. This tour’s been very special for me, being with this group of guys, this group of coaches, the backroom staff and everyone else. It’s just been absolutely fantastic and a real privilege to be a part of it."

On life after rugby

"I've never been under illusions about what's going to happen in later life as a result of what I've put my body through.

"Do I really want to know what I'm going to be like in later life? Probably not, to be honest.

"But the reality for me is that it's now not just about finishing, it's about how I look after my neck in the coming months and years.

"It's a lifetime of maintenance. It's my future life and how I deal with it."