Lions star Tommy Bowe has picked up yet another top award after being named Guinness Rugby Writers of Ireland Player of the Year for 2010. [more] 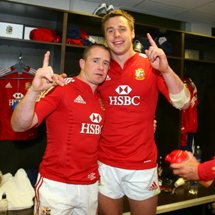 Lions star Tommy Bowe has picked up yet another top award after being named Guinness Rugby Writers of Ireland Player of the Year for 2010.

The powerful three-quarter has been a stand out performer for both club and country this year.

He helped the Ospreys to the 2009 Magners League title and last weekend became the first Irish international try-scorer at the newly built Aviva Stadium.

“Tommy Bowe had an exceptional year winning nearly every award available to him both at home and abroad,” stated the organising committee on the reasons for selecting Bowe.

“A former Monaghan minor Gaelic footballer, Bowe became the first man from the Farney county to play for Ireland in 80 years when he lined out against the USA in November 2004.

“Since then Bowe has established himself as one of Ireland's most consistent performers and was duly rewarded with a call-up to the British & Irish Lions tour to South Africa in the summer of 2009. He has scored five tries in his last six Tests for Ireland.”

During the Lions tour he made six appearances, including all three Test matches, and scored four tries in the process.