The Springboks have recalled rugby Frans Steyn for the second leg of their Grand Slam European tour against Wales. [more] 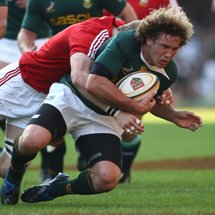 The Springboks have recalled rugby Frans Steyn for the second leg of their Grand Slam European tour against Wales.

Steyn, who broke Welsh hearts at the Millennium Stadium with a trademark penalty from 50 metres to steer the world champions to a 34-31 victory during the summer, wasn’t available for last weekend’s win over the Irish in Dublin because of club commitments in France.

But under fire coach Peter de Villiers has turned to the man who helped the Boks win the World Cup in France three years ago while still a teenager to beef up his midfield for Saturday’s clash in Cardiff.

“Frans has that X-Factor and it is hard to ignore a player with that potential,” confessed De Villiers.

De Villiers and Steyn haven’t always seen eye to eye since his controversial switch from South Africa to Racing Metro 92 in Paris. Their often public disagreements have left Steyn out in the cold for much of this year and Saturday’s appearance will be only his fourth in South Africa’s last 12 Test outings.

Steyn replaces Zane Kirchner at outside centre as he links up with the vastly experienced Jean de Villiers in the Boks midfield in the only change to the starting line-up that beat the Irish 23-21 in Dublin.

“It is always good to be back in the Springbok squad and it means as much to me now to play for my country as it did the first time,” said 23-year-old Steyn.

“It is a big thing for me to be back after everything that has gone on and everything that has been said about me. When I left South Africa people forgot about me pretty quickly and I know that I have to make every chance I get count if I want to keep hold of the Bok jersey.

“I don’t want to be the man in the limelight all the time. It was said that I didn’t want to play for the Boks again when I went to France, but it doesn’t matter where I go or what I do, the green and gold jersey will always mean the same to me.”

Steyn has been playing at inside centre or full back in France, but doesn’t see any problem slotting in outside De Villers against Wales. All he hopes is that skipper Victor Matfield can inspire his forwards to do as well as they did in Dublin.

“The forwards were great in Ireland. If you don’t win a game with forwards playing like that it would be a disgrace,” said Steyn.

“If they do that again we will have a good chance of coming out on top against Wales. I’ve never had an easy game against the Welsh, though, and I’m sure that this year they think they can beat us.

“We will have to go out and prove a point to them before we meet again in the World Cup next year.”