Welsh scrum can be a weapon

Wales forwards coach Robin McBryde believes a trio of Lions can ensure the Welsh scrum can be used as an attacking weapon. [more] 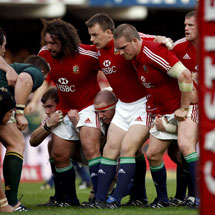 Wales forwards coach Robin McBryde believes a trio of Lions can ensure the Welsh scrum can be used as an attacking weapon.

The Welsh pack dominated Australia at scrum time last weekend and McBryde wants them to repeat their exploits against South Africa this Saturday.

And the Welsh front row hold a mental edge over the Springboks following the Lions tour to South Africa last year.

The tourists’ scrum had been given a tough time in the first Test, but the introduction of Adam Jones and Matthew Rees in the second-half, alongside Gethin Jenkins, saw the Lions turn their deficiency into dominance.

The Lions were again on the front foot in the second international until Jones and Jenkins picked up critical injuries, which ultimately helped South Africa to the Test Series victory.

But with the trio set to be back together against the same opposition a year later, McBryde is targeting a repeat of last week’s powerful display against the Wallabies when the Springboks come to town.

"We are blessed with a front row that played against South Africa for the Lions last summer, and we are all aware of the outcome then," said McBryde.

"And as s a front five, I think they are gelling together. We can match anyone physically, that's where the biggest challenge will be.

"We've traditionally started slowly in the autumn and built as the series went on, but we've really laid a platform.

"We always aim to dominate up front, that's what we're trying to achieve, having the scrum as a weapon.

"Out of the three big southern hemisphere teams, perhaps they are the ones who have adapted slowest to the new interpretations of the law and the way the game has gone.

"There are different strengths and weaknesses with every team. We adapted against Australia and made some subtle changes to our game plan.

"South Africa pose different threats. It is much more of a physical, direct threat. We've got to tailor our approach in attack and defence to match South Africa.

"I am sure they will have worked very hard behind the scenes to make up the ground lost, in the eyes of some, on New Zealand and Australia, and they will be looking to adapt their game likewise. They looked pretty comfortable in the win over Ireland."