Triple British & Irish Lions tourists Ronan O'Gara is within spitting distance of becoming only the fifth player in world rugby history to break through the 1,000 Test points barrier. [more] 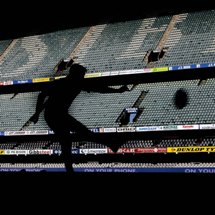 Triple British & Irish Lions tourists Ronan O’Gara is within spitting distance of becoming only the fifth player in world rugby history to break through the 1,000 Test points barrier.

The 33-year-old notched his 15th international try, and helped himself to 15 points, as Ireland beat Samoa 20-15 at the Aviva Stadium. The Munster man’s latest match winning haul took his Irish record points tally to 980.

While New Zealand’s Dan Carter was closing in on world points record holder Jonny Wilkinson with a 15 point haul himself in the All Blacks’ 49-3 victory over Scotland, O’Gara got to within 20 points of the magical 1,000 mark and closed to within 30 of fourth placed Diego Dominguez.

Carter is now hot on the heels of Wilkinson’s landmark figure of 1,178 and is now only 20 points short with two games remaining on the New Zealand tour. Neil Jenkins is in third place with 1,090, 41 of which were for the Lions on their triumphant tour in South Africa in 1997.

Lions Test No 8 Jamie Heaslip provided Ireland’s other points in an unconvincing victory over Samoa. The Irish now have to play New Zealand this weekend before ended their Autumn campaign against Argentina.