Welsh teen-sensation George North has set himself the goal of playing for the British & Irish Lions after his dream debut for Wales. [more] 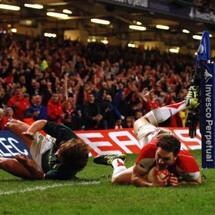 Welsh teen-sensation George North has set himself the goal of playing for the British & Irish Lions after his dream debut for Wales.

The 18-year-old capped his first Welsh start with two tries against South Africa on the weekend, almost helping the hosts to an historic victory.

Now he is aiming to establish himself in the Wales set-up with another big performance against Fiji on Friday, with a World Cup and Lions tour on the horizon.

"I set myself a block of goals at 16 to do before I retired," said North.

"But I seem to have achieved all of them at 18! My immediate goal is to come through the autumn with a good couple of games under my belt, hopefully get back to playing for the Scarlets and then the Six Nations.

"Looking forward, any boy’s dream today would be to get a Lions nod. That’s my goal."

North could have sat out the Friday night clash with Fiji with the Welsh coaches mindful of keeping the Scarlets wing fresh. But North revealed he had no second thoughts about taking to the pitch for his second cap.

"If you offered an 18-year-old the chance to play for his country, it’s a simple answer really, isn’t it?" added North.
"The point for me was I want to get out there having that bit more experience.

"So when games come up and Gatland says ‘George, are you ready?’ I’m going to say yes.

"If he gives you the nod for any game, you take it with both hands. You never turn an international cap down."

North became the joint third youngest player when he took on the Springboks and his impressive two-try performance has gone down as one of the great rugby debuts.

"On your debut you just want to come through unscathed. You want to  have a decent game, maybe get your hands on the ball a couple of times, make a few runs. So to come away with two tries is over the moon stuff.

"The first 10 minutes was a shock to the system. You have to put the crowd out of your mind. In the Magners League and schoolboy rugby you do a couple of things and have a rest. But international rugby is, literally, you hit something, you get up and you go again.

"That first 10 minutes I learnt more how to run lines than anything else."

Despite coming on the wrong end of the result North came out on top of his childhood hero Bryan Habana and he was thrilled to receive his compliments after the game.

"He just said ‘it was a great experience playing against you. It’s a privilege and, hopefully, I can play against you again’," added North.

"I've watched him for three years and thought it would be great to have a game against him. He came up to me and said ‘Well done’. I was thinking  ‘It’s not a bad debut then, is it’?

"From my point of view, that was a big compliment."