Wallabies on the wane?

Have the Wallabies gone from world beaters to average joes' in less than a week? [more] 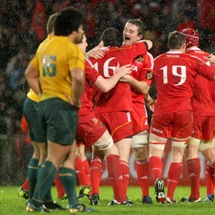 Have the Wallabies gone from world beaters to average joes’ in less than a week?

That may be stretching the truth but there’s no doubt that the past few days haven’t been the easiest for the Australian camp.

The Lions’ next opponents were being billed as the new standard bearers of the global game in the build up to their four match of the end-of-year tour but that growing air of invincibility has since been dealt a hefty blow.

A stunning victory over the All Blacks in Hong Kong at the end of October had been followed by another impressive win over Wales and a hard-fought mid-week success in Leicester, leaving the entire rugby world singing Wallaby praises.

Increasing interest in a new-look Australia packed with exciting young talent saw the likes of Quade Cooper, Kurtly Beale, James O’Connor and David Pocock lauded by all and sundry as the Wallabies were held up as the model on which the Home Unions should base their approach to the game.

Fast forward a week-and-a-half and things are somewhat different.

No one is writing the Wallabies off as a spent force or suggesting they won’t still be serious contenders at the 2011 World Cup but their two most recent results have shown that they are still beatable.

Australia should be respected but not feared, that’s what England and Munster proved within three days of each other this week.

Australia arrived at Twickenham at the weekend as the world’s most-talked about team but they left the English capital with their tails very much between their legs.

The Wallabies weren’t just beaten, they were outplayed by Martin Johnson’s men. An England triumph may have been unexpected but it certainly wasn’t undeserved.

The Wallabies were brought back down to earth by England

All the talk had been about Australia’s refreshing, free-spirited approach but England matched them in that department and even showed a more clinical edge than their prestigious visitors.

This wasn’t just a narrow, somewhat fortuitous win like the one in Sydney when Matt Giteua missed a howler during the summer – this was as comprehensive as it gets.

The 35 points scored by England were the most they had ever managed against Australia, while the 17-point margin equalled their previous best set in 1973 and 1976. It was a finally a display to warm the heart – if you’re not Australian, of course.

From London Australia headed to Limerick where their second-string faced a Munster side looking for another historic scalp.

Outside half Paul Warwick did for his fellow countrymen as he kicked Munster to a 15-6 victory that will now sit alongside their triumphs over the Wallabies in 1967, 1981 and 1992.

Australia were beaten by Munster in Limerick on Tuesday night

The win was made even more impressive by the fact that Munster were missing an entire team of front-line internationals, with only Johne Murphy, Damien Varley and Keith Earls released from the Ireland Squad.

It was Munster's first win over Australia at Thomond, with their three previous wins in eight attempts all coming at Cork's Musgrave Park. Tuesday's famous triumph will now be discussed in the same breath as the 1978 success against the All Blacks when Munster became the only Irish side to have beaten New Zealand.

For the Wallabies, Tuesday’s reverse won’t be discussed with such delight. Deans and co will be keen to forget the result as quickly as possible but you can rest assured lessons will be learnt, starting sooner rather than later.

All thoughts now turn to an Italian Job when Australia take on the Azzuri this Saturday. Three defeats in a week would be unthinkable.