James Robson, the British & Irish Lions team doctor on their last four tours, has been honoured by The Royal College of Surgeons of Edinburgh. [more] 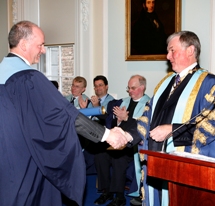 James Robson, the British & Irish Lions team doctor on their last four tours, has been honoured by The Royal College of Surgeons of Edinburgh.

The ‘ultimate recognition’ of a Fellowship ad hominem was bestowed on Robson on Friday night and provided him with a rather special present five days before 53rd birthday.

The Royal College of Surgeons of Edinburgh president, David Tolley, bestowed the honour on Robson, who is also Scottish Rugby’s Head of Medical Services, and invited him to sign the College Register of Fellows.

It is extremely rare for such an accolade to be presented to a non-surgeon and the honour is only given to those who are deemed by the College to have achieved distinction in their professional field and rendered special service to the “art and science of surgery.”

Robson, who was a GP in Dundee, for many years admitted he was “flabbergasted” to be awarded such an honour. Having originally qualified as a physiotherapist from Queen Margaret College, Edinburgh, he then spent a further six years studying medicine at Dundee University.

“It’s incredible. I’m not a surgeon and to be recognised by a College like this is just fantastic. In many ways it’s the ultimate recognition but I believe it’s a reflection on how seriously we treat player welfare and safety in Scottish and indeed British rugby,” he said.

Robson’s involvement with Scottish rugby spans more than 20 years and he has served as Scotland team doctor in more than 100 matches. His involvement with the Lions began in 1993 on the tour to New Zealand and since then he has tended to the needs of Lions players at 58 matches on five successive tours to the southern hemisphere.

David Tolley, President of the College, said: “The Royal College of Surgeons of Edinburgh is delighted to be awarding Dr Robson this Fellowship.

“His dedication to the enhancement of medical care for rugby players at all levels of the game, and his tireless efforts in advancing the reputation and status of sports medicine have earned him the respect of all of our surgical Fellows and Members. The award of the Fellowship of the College is a fitting recognition of his services.”