Gethin Jenkins returns from injury this weekend to allow the 2009 all-Welsh British & Irish Lions front row to try to stop the All Blacks completing a November Grand Slam tour of the northern hemisphere. [more] 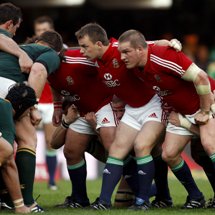 Gethin Jenkins returns from injury this weekend to allow the 2009 all-Welsh British & Irish Lions front row to try to stop the All Blacks completing a November Grand Slam tour of the northern hemisphere.

Jenkins missed the Welsh games against South Africa and Fiji because of a calf injury, but is one of 10 changes of personnel from the 16-16 draw against the south sea islanders at the Millennium Stadium last week.

Head Coach Warren Gatland has rung the changes in an attempt to give his side a chance of upsetting New Zealand for the first time in 57 years. As well as Jenkins, he has also recalled Cardiff Blues wing Tom James.

James was injured when Gatland announced his squad for the four Invesco Perpetual Series ’10 matches this month, but a try scoring return for the Blues against Ulster last Sunday proved he is back to full fitness. And with British & Irish Lions Leigh Halfpenny and Shane Williams both sidelined through injury, Gatland has had to look outside his original selection to find a wing partner for Scarlets sensation George North.

“Tom was injured when we named the squad at the start of the series, but he did well for the Blues against Ulster, scoring a try in a game they should have won. He has genuine pace and that along with size and physicality and some experience at this level are what we are going to need against New Zealand,” said Gatland.

James is one of 10 changes in personnel from the starting line-up in the disappointing 16-16 draw with Fiji last week as Wales seek their first win of the month. Scarlets wing George North and Ospreys duo Lee Byrne (full back) and Adam Jones (prop) are the only players retained in their starting positions.

Ryan Jones and Dan Lydiate keep their places in the side, but switch positions in a back row re-shuffled to accommodate fit-again Blues flanker Sam Warburton on the openside. Warburton’s return from injury is a major boost, as is that of his regional colleague Gethin Jenkins.

Jenkins, who had been suffering from a calf injury, slots into the front row to win his 76th cap alongside Scarlets and Wales captain Matthew Rees. He returns at hooker to make it a reunion for the 2009 British & Irish Lions front row unit.

“We were all disappointed last week when we made a number of changes which we thought we could cope with. We found out we couldn’t, but we hope to be back firing on all cylinders this week,” admitted Gatland.

It’s all change in the second row with the pairing against both Australia (a 16-25 loss) and South Africa (a close fought 25-29 defeat) earlier in the series, Blues lock Bradley Davies and Osprey captain Alun Wyn Jones, reunited. Lions Test half-backs Stephen Jones and Mike Phillips are recalled after also starting Wales’ first two matches of the campaign.

Elsewhere in the backs the centre pairing of Tom Shanklin and James Hook is another that is re-united from the Springboks outing, although both players also faced the Wallabies, with Hook at full back on that occasion. On the bench Wales have opted for a five forwards and two backs