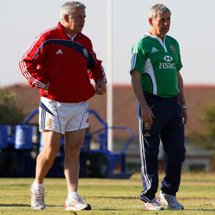 Gatland recently signed a new deal with the Welsh Rugby Union until the 2015 World Cup but the New Zealander has since faced heavy media criticism after Wales failed to secure a Test win this autumn.

But McGeechan, who selected Gatland among his coaching staff for the 2009 Lions tour of South Africa, is convinced the former Ireland boss remains the right man for the Wales job.

"I think stability is important. It's too easy just to say a contract finishes, so we'll move on.

"If we are honest, we are still becoming professional in rugby about how we structure things and what we do.

"The teams that are most effective are the ones with a stable management and a stable coach.”

Wales drew with their 2007 World Cup conquerors Fiji and were beaten by the world’s top three sides last month but McGeechan saw enough positives to suggest they will turn things around in next year’s Six Nations.

A large percentage of McGeechan’s Lions squad that toured South Africa, both in terms of players and management, came from within the Welsh camp and the Scotsman believes that the performance against New Zealand demonstrated that Welsh rugby still has a bright future.

"They would obviously have been looking to win one of their close matches during the autumn,” added McGeechan.

"But they played some good rugby, particularly against the All Blacks, which I thought was the outstanding Welsh performance.

"You look at a couple of mistakes proving costly, but I suppose that's the All Blacks, isn't it?

"But I thought the defence, the commitment and the rugby was very encouraging from a Welsh point of view."