Italy coach Nick Mallett's thoughts on the November internationals suggest the Lions face a mighty task if they are to topple the Wallabies in three years time. [more] 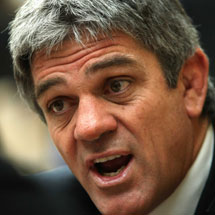 Italy coach Nick Mallett’s thoughts on the November internationals suggest the Lions face a mighty task if they are to topple the Wallabies in three years time.

Britain and Ireland’s elite travel to Australia in 2013 looking to avenge their series defeat to the then world champions back in 2001.

But the dominant performances of the Wallabies, All Blacks and Springboks during last month’s autumn internationals has seen Mallett become the latest high-profile name to suggest the northern hemisphere sides are still setting the standards in world rugby.

"I'm still convinced there is still a huge gap between the two hemispheres in terms of rugby ability and performances," said Mallett, a former Bok boss who coached the Barbarians to victory over an experimental South African side on Saturday.

"If the guys can't knock over the Southern Hemisphere sides when they are tired and still acclimatising to conditions, clearly there is a difference.

"England played one great game. They played out of their skins to beat Australia (35-18).

"And Scotland beat South Africa because the Boks were not at their best and not ready for it. So, yes, there is still a gap.”

England’s win over Australia and Scotland’s triumph over South Africa were rightly celebrated in both countries but they were the only northern hemisphere successes over their southern counterparts.

New Zealand finished their end-of-year tour with a third Grand Slam in five years against the Home Unions; the Wallabies bounced back from defeat at Twickenham to finish with a seven-try hammering of France to add to previous victories over Wales and Italy; and the Springboks secured wins over Ireland, Wales and England.