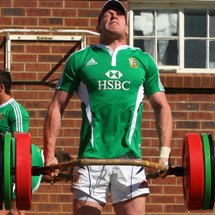 O'Connell, a veteran of two Lions tours, made his Munster comeback as a second-half replacement in the Irish province's 16-9 win over Cardiff Blues.

The towering lock has been out of action for nine moths after picking up a groin injury in the Six Nations and played for Young Munster last weekend before taking on the Blues on Saturday.

McGahan was delighted to see his talismanic skipper return but has warned fans not to expect too much too early.
"It's fantastic for Paul and fantastic for Munster," said McGahan.

"It's fantastic for the supporters too in that he has been gone a long time from the red jersey.

"To get back in the mix is terrific and the squad got a huge boost. He’s fit looking, but he looks after himself really well and he has worked very hard with our fitness staff who did a great job in getting him back.

"The 40 odd minutes he had last week and the 25 now will accumulate, and he will be the better for that in the long run."

Next up for Munster is the Heineken Cup double-header with the Ospreys but that may be too soon for O'Connell, with McGahan preferring to look at the bigger picture.

"We’ll have to wait and see, it could be a bit of a stretch at this stage," added McGahan. "The important thing is that we want him here to play for the rest of the season. We don’t want to push him too early.

"And we’ve got some strong depth there in the second row, with Donncha O’Callaghan and Mick O’Driscoll. Donncha Ryan comes back into the mix next week with Ian Nagle, Billy Holland and young Dave Foley there too.

"Each level  is a huge step and we have to ensure if he’s on the field that he’s able to compete, we have to make sure we put him in the right situation."