Former Scarlets defence coach John Muggleton is back in business in his native Australia and will be looking to stiffen up the Waratahs defensive record in next year's Super 15. [more] 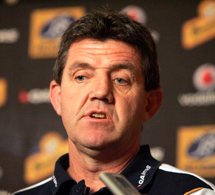 Former Scarlets defence coach John Muggleton is back in business in his native Australia and will be looking to stiffen up the Waratahs defensive record in next year’s Super 15.

But he headed home at the end of last season and has joined the New South Wales union’s coaching set-up ahead of the 2011 Super Rugby expansion.

If Muggleton, who worked with the Wallabies as their defence coach at the 1999, 2003 and 2007 World Cups and also coached Australia A, makes a success of his new role then he could still be around when the Lions tour Australia in 2013.

"We have got to become a lot more attacking in defence at the moment. I know it sounds funny, it's all about denying time and space to the opposition,” said Muggleton after his appointment.

"Sometimes when we've got numbers or available blokes in defence we tend to back off when we shouldn't, because we are worried they have got three or four blokes over on the sideline.

"Well, if you get your defensive line right and your speed right, there's no chance they will ever get that ball out there. Rather than worry about what's on the outside, we want to put more pressure on them and deny them time."

News
Previous story Bittersweet moment for Roberts
Next story SBW on the blindside?