McCaw set to remain an All Black

All Blacks captain Richie McCaw is expected to remain in New Zealand after next year's Rugby World Cup. [more] 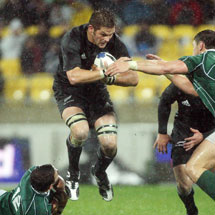 All Blacks captain Richie McCaw is expected to remain in New Zealand after next year’s Rugby World Cup.

A mass exodus of southern hemisphere stars is expected to take advantage of lucrative offers in Europe after the showpiece tournament.

But McCaw, the joint most-capped All Black who played against the Lions during the 2005 tour of New Zealand, has hinted that he will snub the big-money moves to continue leading his country.

"I'm having a really good think about it and I've always said enjoyment is the key," said McCaw, who was recently named IRB player of the year for the third time.

"Rugby is a passion for me but enjoying it is the key. I loved it this year, I loved running out for an international and playing for the All Blacks, there's nothing better.

"So I want to keep going. I'm talking to the union about what they want from me and what I want. If we can come to an agreement I'd love to carry on because I'm enjoying this.

"But I do have a bit to think about over the next wee while. I said I was going to do that on the tour but it didn't pan out like that and I think now that this is the right time.

"I'm having a break, I'm getting refreshed about rugby and I'll start talking about it.

"I've made no secret that I love playing in New Zealand and my desires to play overseas have never been that great.

"Those desires change as you move on in your career, but you can't beat running out in front of 80,000 people at the Millennium Stadium or somewhere else and you'd be a mug to not want to do it for as long as you can."

A big lure for 29-year-old McCaw is the opportunity to lead a new generation of All Blacks after 2011.

"You never know what the coaches are going to do, there could be a new coach, who knows?" added McCaw.

"I want to see the All Blacks keep performing after the world cup. It's not just about one game or one year. It's about doing it right and I want to make sure that when I move on, whenever that is, that it's at the right time."