Jamie Roberts is all set to start his first game in five months and run into some familiar faces when the Ospreys visit Cardiff City Stadium on New Year's Eve. [more] 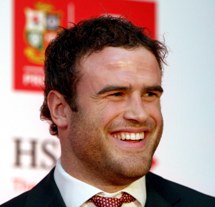 Jamie Roberts is all set to start his first game in five months and run into some familiar faces when the Ospreys visit Cardiff City Stadium on New Year’s Eve.

The 24-year-old underwent surgery on the wrist he initially damaged in the second Test on the British & Irish Lions tout to South Africa last year after he returned from Wales’ summer trip to New Zealand.

He played 40 minutes in Cardiff Blues’ home Heineken Cup defeat at the hands of Northampton Saints two weeks ago, but it ready to start against reigning Magners League champions the Ospreys on Friday.

And Roberts says he couldn’t have wished for a better game in which to make his full return because not only will he be up against one of the top teams in Europe, but he could also find himself going head-to-head with Wales and Lions team mates James Hook and Tommy Bowe in a potentially explosive midfield contest.

Roberts was named to play against the Dragons in Monday’s postponed Magners League match and is now expected to line-up against the Ospreys for his first start since Wales played the All Blacks in the second Test in Hamilton in June.

“It was great to get back onto the pitch against Northampton Saints and I felt strong. But I was blowing a bit by the end,” admitted Roberts, who came on as a half-time replacement in that game on 19 December.

“You can train at that sort of intensity, but you need to get match practice. There is no substitute for playing and, while I would like to think I could pick up where I left off before the injury, only time and a few games will tell.

“Playing for the Blues means everything and I love coming back into this sort of environment. That’s why I would much rather come back into these big games against big teams than anything else and this clash with the Ospreys will enable us to see exactly where we are.

“I’ve played a few times with James and he is skilful, physical and has a great hand off. He is a huge threat in an Ospreys back line that has good balance and has Dan Biggar pulling the strings and kicking the points.

“Tommy stands out with the support lines he runs and he reads the game so well. He scores a lot of interception tries and that is something we will need to be wary of.

“He is another big threat and is one of the form players not only in European, but also world rugby

“Out focus has switched on to the Magners League after the disappointment of going out of the Heineken Cup and we need to win to get back into the top four.”