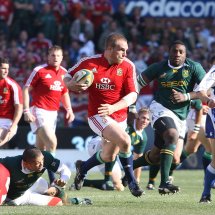 The loose-head prop toured New Zealand and South Africa, in 2005 and 2009 respectively, with the Lions.

The 30-year-old Cardiff Blues man will go under the surgeon's knife today to resolve a toe problem which has been the cause of several other injuries. That will sideline Jenkins for up to 12 weeks meaning he will miss the entire Six Nations.

But the two-time Grand Slam winner believes Wales have enough quality and depth in the  front row to flourish in his absence.

"We have great quality cover in my position, especially with Paul James," Jenkins told the Western Mail.

"Paul James’ been playing really well and will do a great job if called upon. I think we have a great chance to do something this year. We played very well in patches during the autumn. And I think we have a class front five which also has good back-up.

"The scrum went well in November and it’s an area we will keep working on to try and improve. Matthew Rees,  Adam Jones and Paul will drive that now.

"We have to look to impose ourselves on teams in that area in every game we play from now on, even though Australia showed us that there is more to winning Test matches than that.

"Obviously, the first match against England is huge and they have shown some good form. But you have to target your home games and the boys will be really fired up for it."

Although frustrated that he will have to watch the two side's go to battle from the sidelines, Jenkins is confident having the operation was the right decision and that he will be back firing on all cylinders for the World Cup.

"I have bone spurs rubbing together in my toe, basically an arthritic toe, and it has led to me having all sort of problems with my lower limbs, in particular my calves," added Jenkins.

"I’ve tried resting it, and things like putting orthotics in my shoes to spread the weight, but nothing has resolved it. My surgeon gave me the option of an operation or just leaving it and seeing how it goes, but last week I went to London for another opinion and was told I needed it sorted.

"The time for surgery is now, even though I’ll miss the Six Nations, because I have to consider the longer term and the World Cup. The doctors are really positive about the operation, saying I’ll feel so much better afterwards so that’s all good.

"I’m not into making excuses, but after 50 or 60 minutes of a match the toe has been so bad that I just haven’t been able to get any power out of myself. On top of that, mentally it’s dragged me down as well.

"I never take my place in any team for granted, but I don’t want to be in a position where I am not picked for Wales because I am unable to perform at the level I know I am capable of.

"When you step out to train or play you have to know that you can get to that level. That’s where I want to be moving towards the World Cup."