Lawes out of RBS 6Nations

England young gun Courtney Lawes has been ruled out of the RBS 6Nations. [more] 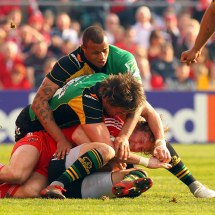 England young gun Courtney Lawes has been ruled out of the RBS 6Nations.

Lawes, one of England's stand-out performers in the autumn internationals, faces a three month spell on the sidelines after damaging knee ligaments.

The versatile back five forward picked up the injury during Northampton Saints' loss to Leicester Tigers on the weekend. The win saw Leicester leap-frog the Saints into top spot in the Aviva Premiership after the victory.

"Courtney is expected to be out for around three months but we fully expect him to be back playing before the end of the season," said a Northampton spokesman.

But it remains unclear whether the 8-cap international will require surgery. Lawes made his England debut against Australia in November 2009 but established himself in the England set-up after the 2010 autumn internationals, starting all four games.

It is a further blow to the English pack which has already been weakened by injuries to 2009 Lion Tom Croft and Tom Wood. England kick-off their Six Nations campaign in a Friday night showdown against Wales at the Millennium Stadium on February 4.