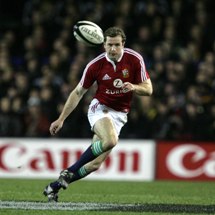 The 2005 Test Lion could also be out for the remainder of the season due to a broken bone in his foot and ligament damage to his ankle.

Murphy was stretchered from the field during the closing stages of Leicester’s league win over Northampton on Saturday and will now have surgery to correct the problem within a week.

Although no longer seen as Ireland’s first-choice No15, the 32-year-old had been expected to be named in Declan Kidney’s Six Nations squad and to challenge for a place in the matchday 22 for the tournament opener against Italy.

Murphy’s absence makes it even more likely that 2009 Lion Rob Kearney will start at full back, with fellow Lions Luke Fitzgerald and Keith Earls possible replacements if Kearney gets injured or loses form.

While Murphy’s latest setback is a big blow for his country, it is perhaps of even greater significance to his club side.

One of the most influential players in the Aviva Premiership and a hugely experienced figure in the Leicester ranks, Murphy had been on course to captain the Tigers to a third successive league title.

And while he is unlikely to feature on the playing field this season, Leicester wing Scott Hamilton insists Murphy can still play a vital role at the club.

"His ankle is no good but he is a resilient fellow," Hamilton told the Leicester Mercury.

"It's another injury and we are certainly getting the wrong sort of injuries as a squad.

"Geordy will still have a big role to play for us behind the scenes this season, I am sure."