Lee’s love of the Lions

Lee Mears says touring with the Lions was a truly special experience he will never forget. [more] 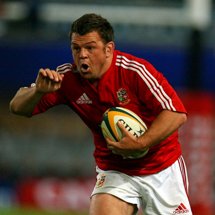 Lee Mears says touring with the Lions was a truly special experience he will never forget.

The Bath hooker was part of the Lions’ 2009 adventure in South Africa, playing a total of five games, including the first Test against the Springboks.

Mears was England’s first-choice No2 in the lead up to the latest Lions tour but the 31-year-old admits he was far from certain of his place in Sir Ian McGeechan’s touring party.

When tour manager and Lions legend Gerald Davies announced the 37-man squad at a Heathrow Airport Hotel in April 2009, Mears was sat watching from a distance hoping his name would be etched into rugby history.

“It was a weird experience. I was sat in the club bar in Bath with a few of the boys and a couple of the management waiting for the squad to be announced on TV,” said Mears.

“In true Gerald style, he went through the squad backwards from 15, 14 and I was thinking ‘Oh God’. Then I thought, ‘at least two is before one,’ but then he did all the props! I think I was the second to last name to be read out so it was pretty nerve wracking.

“You never know if your name will be read out. I’ve been in similar situations quite a few times. Sometimes you’re picked, sometimes you’re disappointed. It was amazing just to see my name up there. Everything Gerald did in the build up was just fantastic.

“It was a feeling of relief for me, really. Quite a few of the boys were saying ‘well done Mearsy’ but it didn’t really dawn on me until a bit later on when everybody started texting. I was straight on the phone to the Mrs and then to my mum and dad. It was fantastic.”

Becoming a Lion was a weight off Lee Mears' shoulders

Born and brought up in Devon, Mears was fully aware of the stature of the Lions during his time with Torquay Athletic, Paignton College and Colston’s School.

The 5ft 9in star has happy memories of the 1997 triumph in South Africa but he never imagined he would be talked about in the same breath as those special tourists.

Even when the 2009 tour edged ever closer and he was in pole position for his own country, Mears insists nothing could be taken for granted.

“I was definitely brought up on the Lions,” added Mears, who is now in his 13th season with Bath.

“You can never imagine in a million years that you’d be a Lion. When the 1997 Lions tour came out on DVD, I was at boarding school and that was the DVD of the time, Living with the Lions.

“Even when everybody mentioned that it was a Lions year, you don’t really think about it. It wasn’t really spoken about within the England camp either, it was all quite quiet.

“But then all of a sudden you had this group come in and measure you for kit. We all love a bit of free stash and everybody was thinking ‘this could be amazing’.

“It dawns on you that, if you have a good Six Nations, you could be a British & Irish Lion, something no one can ever take away from you.

“I’m definitely one of those people who views it as more of an opportunity rather than pressure. If it happens, it happens, and, luckily, it did.”

That attitude paid dividends for Mears as he beat off stiff competition for one of the three hooking spots among McGeechan’s men.

Mears joined Ireland’s Jerry Flannery and Welshman Matthew Rees at the Lions’ training base at Pennyhill Park in Surrey where the sense of unity among the whole group quickly became apparent.

No one knows the intricacies of a Lions tour like McGeechan and it’s no surprise that Mears was immediately given the impression that this particular tour would be different from any other he had previously experienced.

“Ian McGeechan and Paul O’Connell did an amazing job at Pennyhill Park. Paul stood up in front of the boys and said, ‘this is a different tour to normal. It’s harder than an international tour but we’ve got the best players here and you can’t just shut yourself off and hide away. You’ve got to come out and be open and friendly you’ll have a better time for it’. That’s what we all tried to do.

“It probably took a couple of weeks to get to know everyone properly but it was really interesting to see how friendly everyone was. Everyone bought into the camaraderie side of things and it was a fantastic tour.

“We all went out for food as often as possible. A few of us went to watch the golf at Wentworth and we went to the races – all the things that boys love doing. That bonding carried on on tour.

“Powelly (Andy Powell) was our entertainment but there were so many characters. I had some great room mates. I had Powelly, ‘Bomb’- Adam Jones, Alun Wyn Jones, even Brian O’Driscoll. Nathan Hines gets a special mention – we were little and large and we bonded pretty well.

“I’ve stayed quite good friends with a few of the boys. I still speak to Gethin (Jenkins) a fair bit, plus Jamie Heaslip and Paul O’Connell. The whole experience was amazing. I had a wonderful time.”

Lee loved the atmosphere within the Lions camp

As for the rugby side of things, results might not have quite gone the Lions’ way against the World Champion Boks but that can’t diminish the immense pride Mears felt at representing the whole of Britain and Ireland.

A series win was what everyone was aiming for but, although that sense of ‘what if’ will always linger, Mears says nothing will ever lessen the remarkable achievement of joining such a famous rugby family.

“You’re beaming when you put on the shirt. Putting on the shirt for the first time brings a bit of pressure but also lots of excitement. But it’s the same even in training when you look around and see all the boys that you’re surrounded by you get that buzz.

“I thought I had a reasonable tour and was in with a chance of a Test place but everyone’s so good at that level that you don’t know if you’re going to get the nod. When Geech read out the team and you turn the page over and there it is, I was just thinking ‘here we go – this is everything I’ve ever dreamed of’.

“It was a tough old arena. We probably played against South Africa at their height. Being selected would definitely be the highlight of my career – it would just have been nice to have won.

“That’s sport, what ifs. The margins are so fine. I’ve got so many good memories but, unfortunately, we didn’t get over the final hurdle. Hopefully, if my career goes on long enough, I’ll be around for another one.

“In the back of your mind, you’d love to be involved again somewhere further down the line. You’d take the Lions environment every day of the week.”