Scotland head coach Andy Robinson has extended his contract with the national side, which will keep him at the helm until the December 31, 2015. [more] 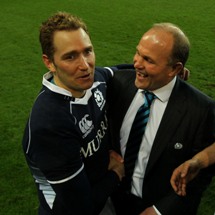 Scotland head coach Andy Robinson has extended his contract with the national side, which will keep him at the helm until the December 31, 2015.

The former British & Irish Lion back-row has been highly praised in recent months for the changes he has made to the fortunes of the Scottish national side.

Even though they began their 2011 RBS 6 Nations campaign with defeat away to France last weekend, Robinson’s side made a big impression in Paris and he will now load Scotland into the next two world cups.

“I am very proud to be the Scotland Head Coach and I am delighted that the great work already underway will continue until after the Rugby World Cup in 2015,” he said.

"I am very happy with the progress that has been made by Scottish Rugby in recent seasons and have every confidence the Scottish professional teams will continue to play an important role in supporting the success of the Scotland team.

"I want to personally thank Scottish Rugby and the rugby public for the fantastic support the national team enjoys and I can assure them that I will be doing everything I possibly can along with my management team and the players to bring further success to the nation in the years ahead.

“This Saturday’s game against Wales provides us with the perfect opportunity to get that important first win in the RBS 6 Nations championship.”

Scottish Rugby’s Chief Executive Gordon McKie, hailed Robinson’s extension. He said: “We are absolutely delighted that we have secured Andy until December 2015 . I said when we appointed Andy back in 2009 that he would bring success to Scotland and I have every reason to expect that Scotland will continue to improve in the coming years under his leadership.

“Andy is an important part of the Scottish Rugby family and he has made a real impact on the national team taking us to seventh in the world and achieving fine victories over Southern Hemisphere opposition last year.

“Andy is highly regarded throughout the world as a coach and to have secured his services until beyond the Rugby World Cup in England in 2015 is a great coup and further underlines that rugby in Scotland is in good health.”