The RBS 6 Nations returns for Round 3 this weekend and two British & Irish Lions team mates from the last two tours will be battling against each other to claim yet another record. [more] 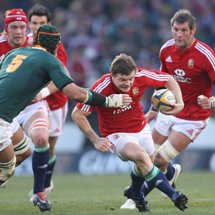 The RBS 6 Nations returns for Round 3 this weekend and two British & Irish Lions team mates from the last two tours will be battling against each other to claim yet another record.

Between them Brian O’Driscoll and Shane Williams already hold a hat-full of records, but they are now within touching distance of a mark set 78 years ago by another great Lion, Ian Smith.

The ‘Flying Scotsman’ scored 24 tries in a 31 match Championship career that included Scotland’s first Grand Slam in 1925. The Oxford University and London Scottish wing scored at the phenomenal rate of three tries every four Tests, including nine tries in eight games against England.

Smith’s mark has withstood the test of time from many legendary challengers for the last 78 years, but O’Driscoll and Williams are now closing in. The Irish skipper is just one try away from matching Smith’s mark after claiming his 23rd touchdown in the recent Irish victory over Italy in Rome.

O’Driscoll’s haul has come from 52 Six Nations outings, while Williams made it 22 tries in 39 games with his brace in the win over the Scots at Murrayfield.

Smith was a key member of the great Oxford University three-quarter line, along with Phil Macpherson, George Aitken and Johnny Wallace, was a deadly finisher when given a merest sniff of the try line.

In the 1925 tournament he scored a Championship record equaling eight tries in just two matches – he crossed four times against France and then repeated the feat a fortnight later against Wales.

Born in Melbourne in 1903, and brought up in New Zealand, Smith was educated at Winchester and qualified to play for Scotland through family connections in the Borders.

Smith was a British & Irish Lion to South Africa in 1924 – the first tour after the end of the First World War – and in 1933 he captained the Scotland side who won the Triple Crown in Dublin, eventually defeating the Irish 8-6 after the first match was cancelled amid ferocious blizzards. It was Smith’s last international and a fitting end to an exceptional rugby career.

The 2011 RBS 6 Nations is set to be Williams’ swan-song, so he will be hoping to maintain his great record against the Italians in Rome this weekend. He currently has nine tries against them in eight games.

O’Driscoll has five tries in 10 games against the Scots, but has yet to score at Murrayfield. If he puts that record straight on Sunday then he will join Smith in the Championship record books.
THE SMITH CHAMPIONSHIP TRIES
FIVE NATIONS RECORD – P 31 W20 D0 L11, Pts 72 (24 tries)