David Wallace has urged Ireland to learn from their mistakes against Wales and finish the RBS 6 Nations with a bang. [more] 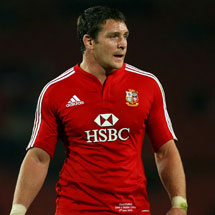 David Wallace has urged Ireland to learn from their mistakes against Wales and finish the RBS 6 Nations with a bang.

Mike Phillips' controversial match-winner may have grabbed all the headlines but Wallace, a veteran of two Lions tours, reckons his side would be better served to put their own house in order rather than dwell on the past.

"Both side's gave it everything and it's just disappointing that we didn't come away with the result," said Wallace.

"I didn't see it at the time but the try was given. These things happen, calls go the right way and sometimes they go the wrong way.

"But if we look at other parts of our game perhaps we could've been more clinical in their 22 at times. We're not going to focus on the try.

"You have to look at yourself first of all. It's easy to blame something else but you will never learn that way."

Ireland now face England tasked with the job of halting their march to Grand Slam glory. And Wallace is adamant Ireland can bounce back to finish the Championship on a high.

"We have another game, we're at home, coming off a defeat and we want to put the record straight with a win."