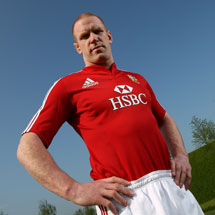 Trimble revealed the lock's speech helped inspire Ireland to their destructive RBS 6 Nations victory which put an end to English hopes of a Grand Slam.

"Paul is massively motivated and that inspiration filtered through to the rest of the team," said Trimble.

"We were unbelievably motivated to stop them winning the Grand Slam."

Ireland hit top gear against England, for the first time in a frustrating Championship, and Trimble reckons it was part due to the rousing call to arms from the 2009 Lions captain.

"He's always got something special to say and it always has the desired effect.

"I knew it was coming – I was thinking 'he's going to say something class' and he did. He never lets you down during an England week.

"I can't give too much away about exactly what he said and I'd be paraphrasing so I couldn't do him justice. It was very inspirational though.

"Everybody's massively motivated against England – we never get sick of beating them and that's why we enjoyed the win so much.