Roberts insists Blues are in the hunt

2009 Lions Man of the Series Jamie Roberts is adamant the Cardiff Blues can still qualify for the Magners League play-offs. [more] 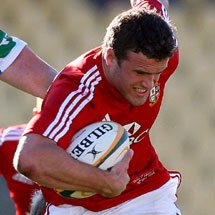 2009 Lions Man of the Series Jamie Roberts is adamant the Cardiff Blues can still qualify for the Magners League play-offs.

The Blues failed to secure the victory in the game they had billed as a must-win encounter against the Ospreys on the weekend.

But the 21-21 draw has seen them maintain their place in the race for the top four.

Although it was not what they had targeted, Roberts insists the Blues should be happy with the result at the Liberty Stadium especially when considering the pressure their set-piece came under.

"We have to be pleased looking back at it," said Roberts. "With the set-piece we had, we have to be happy with a draw.

"We struggled in the scrum and in the lineout. So, in hindsight, we should be very pleased with that result.

"We’ve gone away from home against a very good team and drawn without a set-piece really, so we need to be pleased with that."

The Blues are currently in fifth position but hold a game in hand over all four teams above them in the league table.

The Welsh region make the trip to Connacht next weekend and Roberts maintains the Blues are still major play-off contenders.

"We are still definitely in the hunt," said Roberts.

"Three of our last four games are away from home But we really need to target all four games.

"It's going to be very tight. The Ospreys have to play Munster, while Ulster are playing very well. They haven’t lost for a number of weeks now.

"It's a huge couple of months for us, the Ospreys and the Scarlets in that hunt for that play-off position.

"Our game in hand, away to the Dragons, promises to be a huge match.

"The play-off system in the Magners adds to a very exciting end to the season, especially as the Welsh teams are out of Europe and it’s the sole focus now."