Wallaby veteran Nathan Sharpe could yet face the Lions after he extended his playing career beyond the current season. [more] 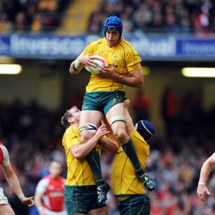 Wallaby veteran Nathan Sharpe could yet face the Lions after he extended his playing career beyond the current season.

Australia’s most-capped second row had been linked with retirement and a possible move overseas but has instead decide to resign with the Australian Rugby Union until the end of 2012.

And with the Lions arriving Down Under just a few months later, Sharpe could be tempted to take his career into a 16th season in the professional ranks once his new deal comes to an end.

The 33-year-old, who is just seven games short of a century of international caps, still has every intention of keeping his place in the Wallaby squad for this year’s World Cup and beyond.

"I'm enjoying playing rugby at the moment and that was always something that was going to be a determining factor in deciding what I wanted to do past this season," said Sharpe, who will remain with struggling Super Rugby outfit the Western Force.

"If that involves continuing to represent my country then I'd love to do that.

"West Australian rugby has been fantastic for me … so it was a no brainer really.

"While this year hasn't panned out as we'd all like, the potential is tremendous.

"There are a great bunch of guys here, a good coaching staff as well, and I'd like to be part of the success I know this club can achieve.

"I consider myself very lucky to have played alongside some great players and it is fantastic to see the next wave of them coming through."

Sharpe’s decision to stay in his native country was welcomed by Wallaby head coach Robbie Deans, who has now seen 12 of his current squad resign with the ARU for next season at least.

"He is an experienced player and still has a lot to offer."